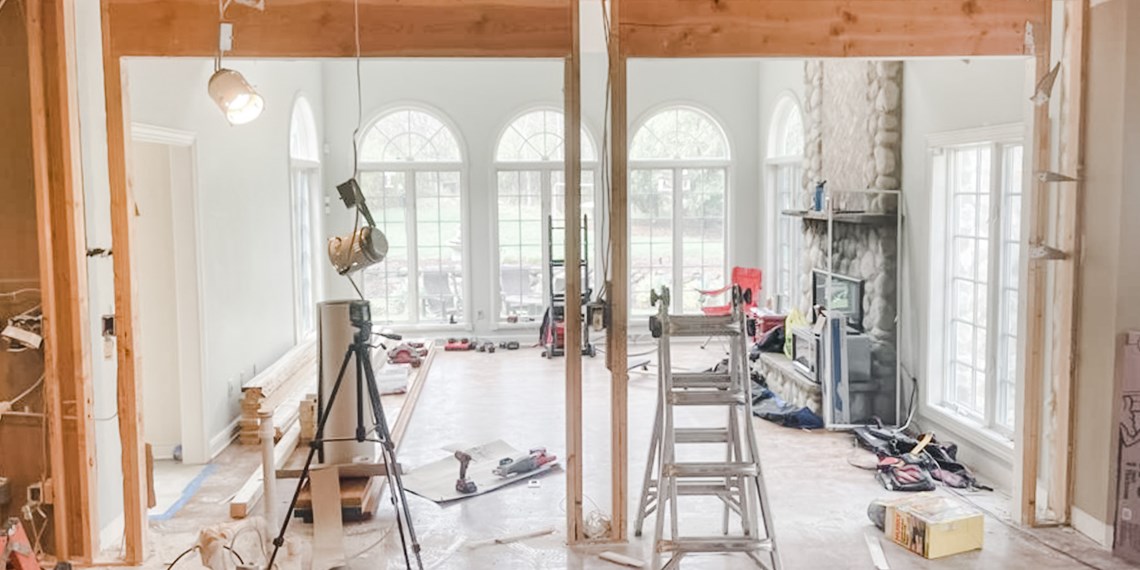 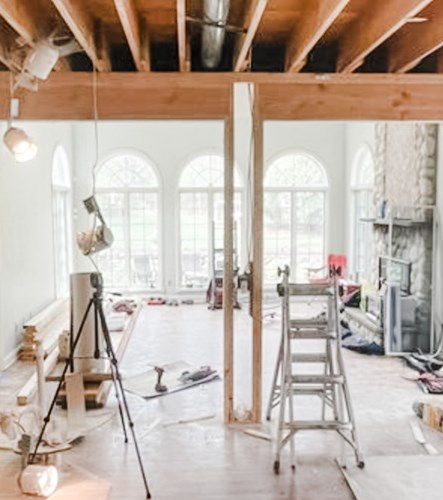 As part of our mission and commitment to our clients,
Refined Renovations is proud to be a resource to help
our customers invest wisely in their home.

Laura, our Director of Marketing, recently sat down with Josh Brown of Bliffert Lumber about a topic that’s been on many minds this past year: the price of lumber.

So let’s begin by introducing Josh.

JB: I’m the VP of sales and part owner of the Bliffert Lumber. I’ve been with the company for 20 years, starting off in counter sales and worked my way up—that's what I did with my political science major. As VP of sales, I’m in charge of all the outside sales and salespeople. I was in charge of operations but we recently hired an operations manager, which is great because now I only have like 20 things to do instead of 25. What a relief!

What I enjoy most about my job is that I work with someone I trust, someone honest. That's what keeps me coming back—that and I don’t have to wear a suit and tie every day.

RR: Glad to hear it! Tell us more about Bliffert Lumber.

JB: Bliffert has been in business since 1905. It’s always been a family business and will be owned by family for as long as Eli [the owner] lives. As long as Eli is around, there is no intention to sell to some big conglomerate or something like that.

When I started here in 2001, we had two locations. Since then, we've grown to seven locations and plan to expand into the future. All of the locations are in southeastern Wisconsin, as far west as Waukesha, as far south as Sturtevant and we now have a new location in Germantown. We service up to Green Bay, to the west side of Madison and to the northern suburbs of Chicago.

RR: I'm really curious what you've seen through the course of the pandemic—if you could walk me through the trajectory over the past year.

JB: So like everybody else, we had absolutely no idea what the pandemic was going to mean for us. We were prepping for the worst: we were assuming that we might need to cut staff, but we were also looking at loans so that we can keep everybody working. We didn't know if we'd be classified as an essential business, so we were also preparing for a shut down. It became clear very quickly that we were going to basically not shut down but instead would be busier than we've ever been.

The demand started with treated lumber, and people that we’d never seen before were  coming in for lumber to build fences, decks—all these projects that people working from home now had time to do. And that's kind of been the trajectory ever since. We saw problems in the supply chain starting to develop and we saw availability issues coming down the pipeline. Once we realized that we were going to remain open, Eli started to buy everything he could, as often as he could, and everybody was working more than we thought we would. It just kept getting busier and busier, with homebuilding and remodeling and DIY shooting through the roof. It was it was pretty unbelievable.

It just kept getting busier and busier, with homebuilding,
remodeling and DIY shooting through the roof.

RR: When did the supply chain bottlenecks and shortages start to show up? And how did that affect your business?

JB: It started to show up pretty early.  The majority of our lumber comes from the mills in Canada. They weren’t really sure what was going to happen, so they slowed their production down because they didn't want to be sitting on a bunch of lumber that wasn’t going to sell. We started to see delivery issues right away, and the harbinger was that treated lumber was so expensive, that high cost was just going to filter to everything. It's like with toilet paper, bottles of water, or canned good—you’d see it in the stores and the next day, the shelves were barren. It just spread like that: first in grocery stores and then in the building materials industry.

RR: When you say delivery issues, is that because because truckers were furloughed, or what was the reason for the delay?

JB: The vast majority of the lumber that we get is via rail car. When the railways thought they were going to be slowed down, they started pulling rail cars off of the tracks for maintenance and whatever else, which meant they couldn’t be sent out right away. It’s a lot harder to get railcars rolling again than to get semis and flatbeds going.

RR: I had read there was some insect infestation in the Pacific Northwest that wiped out a lot of trees. Did this affect your business?

JB: No, it’s pretty standard. There's always something, like a fire in Canada that makes mills close down, or a hurricane in Florida that makes OSB prices go up. Those are all kind of normal and it's just to be expected every year. The leap in demand and the shortage in supply is what's really driving all the issues now.

RR: So the shortage in supply: is it because the demand is so high, or is it also because delivery is still bottlenecked?

JB: It's compounded, but I see delivery getting a little better. But again, when you factor in that nobody knew what was gonna happen, and they shut down their production. And while they’re shut down, demand goes through the roof and now they want to ramp back up as fast as possible. Also, Canada had more strict regulations for COVID. If somebody had COVID at a factory, they’d shut the whole factory down for 14 days instead of doing contact tracing.  Meanwhile, demand is still going through the roof, so they’re trying to get all this production caught up, but it’s hard to catch up when all they're doing is handling their backlog.

RR: So even over a year later, they’re still handling backlog? Or are mills starting to keep pace with the current demand?

JB: I think we’re starting to see a little relief in in regular lumber. But when you talk about something like OSB, which is a fully manufactured product that has resins and glues in it, they're having problems getting the resin so they can only produce as fast as they can get the products they need. Now they're finally up to full capacity and are trying to run 24/7, and maybe they get a little caught up—and then all of a sudden, they can't get the resin they need to make the product, so they're right back in the same boat.

RR: Let’s break this down for like somebody who might not be totally wood savvy. Most everyone knows what a two-by-four is. What is the price for a two-by-four now versus pre COVID?

RR: When do you foresee lumber prices returning to normal levels?

JB: It’s going to be while until will we be at a pre-COVID price level. I think we're starting to see production levels for regular lumber start to meet demand, and I think we're going to start to see those prices kind of retract here very soon. But due to the manufacturing process of  engineered products, those are going to be inflated into the first quarter of next year. As far as a big picture, everything may kind of come back to somewhat normal, maybe second quarter of next year.

As far as a big picture, everything may kind of come back to
somewhat normal, maybe second quarter of next year.

RR: In the meantime, summer is here, people are still at home, and a lot of people are thinking about renovating or want to add that deck or do that DIY project. What are some ways that they can do it in a financially responsible way? Do you have any ideas for customers to save?

JB: I’d never recommend using a an inferior product, so treated lumber is what it is, cost-wise, across the board, no matter where no matter where you buy it. If you’re renovating and getting a loan, interest rates are still very low. Now is the time to get those home equity lines of credit or loans to do something—just don't cheap out on the actual product that you're using, because it's going to be with you for a long time. Definitely use a qualified contractor so they use a quality product product.

If you’re renovating and getting a loan, interest rates are still very low. Now is the time to get those home equity lines of credit or loans.

If you’re renovating and getting a loan, interest rates
are still very low. Now is the time to get those home
equity lines of credit or loans.

RR: It sounds like a mix of historically low interest rates and high lumber prices—maybe it’s creating some sort of balance there in terms of costs to consumers.

JB: I think that's why we haven't seen a complete economic collapse to this point. If interest rates weren’t at the lows that they are, people would still be paying this kind of money for material. We know the interest rates aren't going down anymore, so people might as well grab that. Otherwise, you might be in a reverse situation where all of a sudden, you've got a 6% to 10% interest rate, and you've got cheap lumber.

RR: Is there anything else that you feel  people should know to be an informed consumer at this point in time?

JB: Work with people you trust. Work with the people that have been around for a long period of time. Work with NARI remodelers because there are people out there who are going to try and take advantage of the situation with prices being so high.

Work with people you trust. Work with the people that have been around for a long period of time.

RR: Is there anything else you want people to know?

JB: We’re trying to keep our prices as low as possible, and we're not going to go after new home builders or new big customers because we want to make sure that our core customers have what they need. That’s the kind of the mindset that we have, and also to keep our prices as low as possible. We're not trying to make the same percentage as we were pre-COVID, so we can be fair and let people keep their projects going. We don't want to see people stop building, because that's not going to be good for anybody.

RR: We appreciate your insight, Josh. Thanks for being a reliable source of information for all of us.

Would you like more details on our design process?